Europe saw approximately 60€ billion worth of telecom sector deals in 2019, of which fiber and open access fiber transactions together contributed a share of 45 percent (see Figure 1). More than half the fiber deals executed last year were open access fiber, with a total value of 13.2€ billion, the largest of them coming from Deutsche Glasfaser DE, inexio DE, Covage FR, Altice PT, CityFibre UK, in addition to the Open Fiber IT deal in 2018. All top five EU countries have witnessed at least one highprofile open access fiber transaction in the last two years.

Open access fiber together with fiber is clearly taking the lead in almost all telco deals, with fresh external investment coming from private equity (PE) funds/infrastructure funds (e.g., Deutsche Glasfaser, inexio) and energy companies (Open Fiber), in addition to government funding for rural fiber and traditional telecom investment in fiber. (We provide a detailed perspective into the origins of FTTH wholesaling, giving rise to a case for a new fiber model, in our upcoming Arthur D. Little report, “A new future to come: M&A delivering ideas on FTTH wholesaling. ”)

The most prominent of all these deals comes from Open Fiber, which announced nationwide fiber coverage for Italy, with a business plan to pass 18 million homes over the next six years (see Figure 2). Subsequently, the company has successfully obtained 3€ billion in government funding for rural fiber and another 3.5€ billion of debt funding for the rest of the country. In the first quarter of 2020, Bloomberg reported that Open Fiber might become a target of a high-profile acquisition by the incumbent Telecomm Italia (TIM), along with PE fund KKR, to create a nationwide open access fixed infrastructure provider in Italy. It is noteworthy that Italy, which until recently was one of the lagging fiber markets, is now seeing multi-billion-dollar interest – not just from Open Fiber but also from TIM. These deals are expected to propel Italy as one of the leading fiber markets in Europe in the next five years.

2. Investing in open access fiber is an ecosystem game changer

Investing in open access fiber is not a business-as-usual strategy, but rather an ecosystem game changer for the whole country. The impact on the macroeconomic fundamentals of the market is significant, with the economy, investors, operators and end users standing to benefit in the following ways:

Macroeconomic benefit to the country 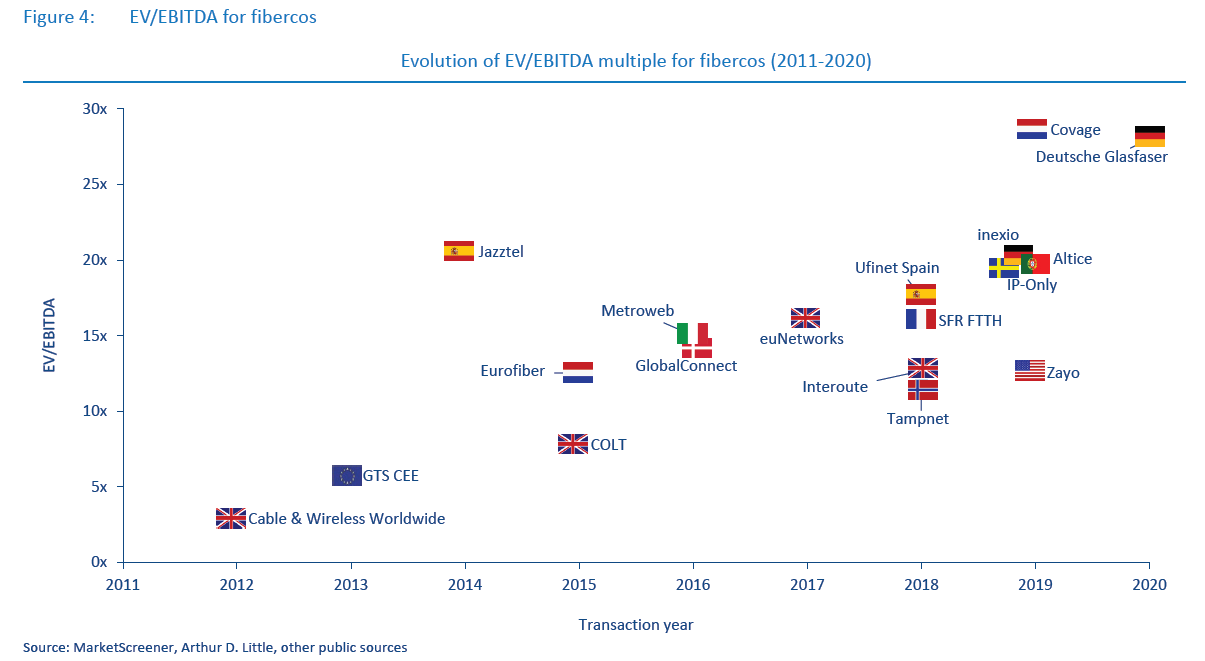 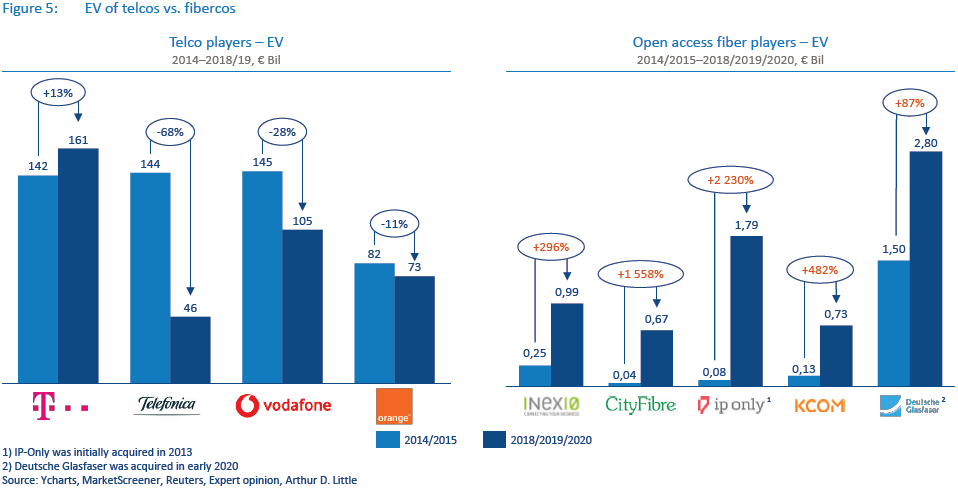 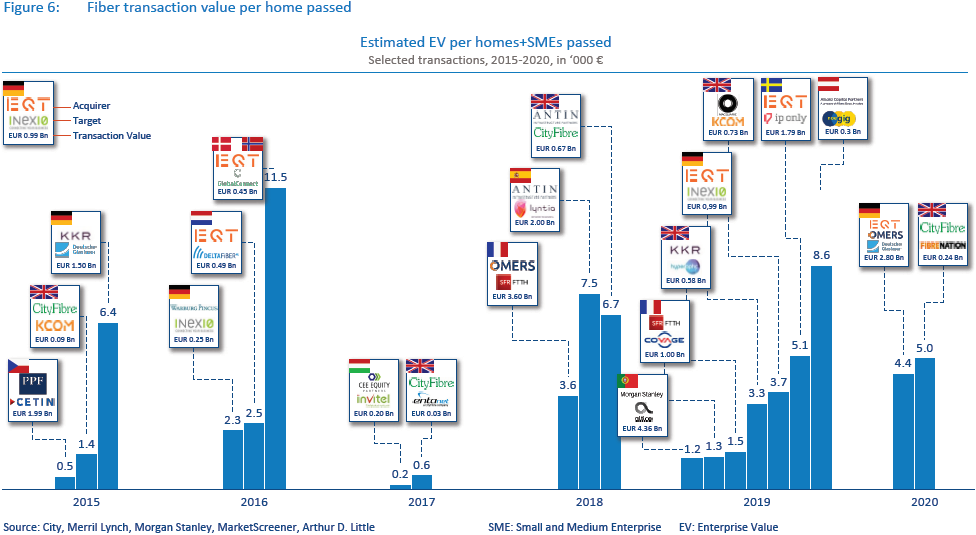 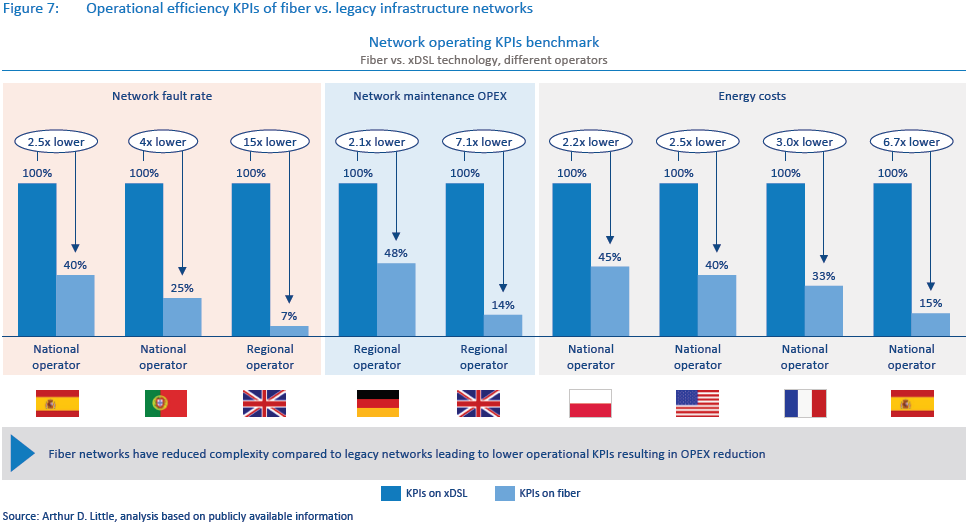 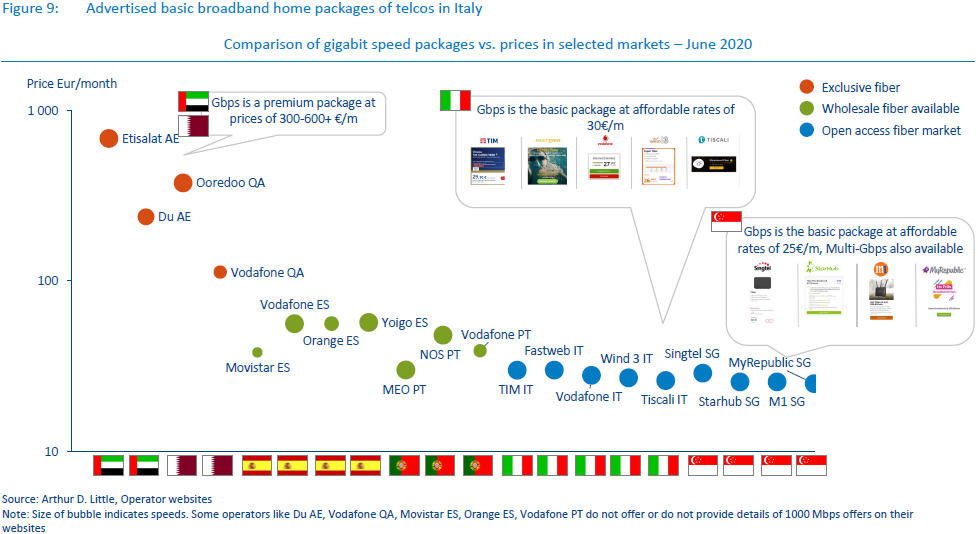 4. Strategies pursued by telcos in reaction to increased interest in open access fiber

Incumbents attempt to maintain or retake the lead

We have observed incumbents attempting to maintain or retake the lead in shaping the fiber roadmaps for their respective countries (as seen in Figure 10). Although incumbents have traditionally resisted partnering with other entities or opening their fiber networks for wholesale services, we see some incumbents warming to the idea of taking a role in establishing open access fiber infrastructure.

There have been rumors of strategic moves by multiple incumbents in Europe in this direction, and we believe many new fiber deals will be announced soon by incumbents in Europe that are either partnering directly with challenger open access fiber entities or are partnering with other nontelco entities to roll out large-scale open access fiber in their respective countries. (An upcoming Arthur D. Little report will provide further details on incumbent fiber strategies.)

Shutting down the legacy copper network is another strategic advantage of rolling out a nationwide fiber network, which we assess in detail in Arthur D. Little’s upcoming edition of “Race to Gigabit Fiber 2020.”

Cable companies historically have benefited from superior data speeds as well as low churn rates of their subscribers compared to other fixed broadband products like xDSL. But with gigabit FTTH, cablecos are now increasingly being challenged on multiple fronts.

Typical cable networks consist of multiple active components, which inherently require higher operations/maintenance and energy costs versus fiber networks, which have a higher share of passive components that are easier to operate. Consequently, cable networks eventually succumb to cost disadvantage when competing with fiber-only networks. Additionally, to deliver gigabit speeds to customers, cablecos have to plan for a new wave of CAPEX to upgrade their infrastructure to Docsis 4.0, whereas FTTH networks can already deliver gigabit speeds and symmetric speeds.

Moreover, the use of videoconferencing, real-time collaboration tools and cloud-based services is constantly on the rise, implying that not just high speeds but also symmetric connectivity with low latency are required. The recent COVID-19 crisis has given a strong impetus for the use of these tools, and we believe the adoption of remote working tools will continue to increase after the pandemic. Fiber networks have a better performance compared to cable networks when it comes to symmetric high speeds with low latency.

Given the above challenges cablecos face, and with increasing fiber rollout by competitors, cablecos are also directly or indirectly obtaining access to fiber. Some cable companies, such as Vodafone, are tactically extending their footprint with wholebuy agreements with other open access fiber providers, such as Deutsche Glasfaser. In another example, StarHub SG is using the open access fiber available in Singapore for its customers and is reported to have decommissioned its cable network in 2019.

We are seeing challenger telcos increasingly cooperate with open access fiber entities as they seek to benefit from wholesale access to gigabit broadband networks. Theoretically, the greater the number of telcos signing up with long-term wholesale contracts with open access fiber providers, the higher the probability of success of low-cost rollout and higher gigabit broadband penetration in that market.

In Italy, for example, Open Fiber signed whole-buy agreements with almost all challenger telco operators in the first years of its launch, enabling it to scale up its business from a regional provider focusing on a few regions in northern Italy to a national entity with nationwide rollout plans. Such large-scale scale-up is not without operational, financial and political challenges. Thus, we are observing with keen interest the fiber market developments in Italy.

As another example, Vodafone has used a mix of all the above strategies to improve its access to gigabit fixed infrastructure. In Germany, Vodafone DE followed the M&A route to gain a strong foothold in the fixed infrastructure market with its acquisition of Kabel Deutschland seven years ago. Vodafone DE is continuing to expand its footprint with whole-buy agreements with Deutsche Glasfaser, inexio and other regional fiber network providers in Germany. In Italy, Vodafone IT was previously investing in building its own FTTC network. However, after its deal with Open Fiber in 2017-18, Vodafone IT announced a stop to all future FTTC investment, relying exclusively on Open Fiber’s FTTH network for nationwide coverage. In the UK, Vodafone UK has struck multiple agreements with Openreach, CityFibre and others to expand its fiber footprint. In Ireland, Vodafone co-invested, along with the electric company ESB in SIRO to roll out open access fiber.

Open access fiber is opening up new opportunities for nontelco companies, like energy companies, municipalities, infrastructure funds and others, to invest in future nationwide critical infrastructure – often with positive government support. Although the quantum of investment is large, open access fiber offers long-term stable cash flows and higher multiples, thus offering an attractive alternative to traditional telecom equity or debt investment. Italian utility Enel, through its investment in Open Fiber; ESB in SIRO Ireland; DeltaFiber in the Netherlands and Germany; KKR in Deutsche Glasfaser, etc., have all seen high valuations, as illustrated earlier in Figure 6. Non-telco firms are also taking active interest in owning parts of the fiber network, as seen in the interest in the ongoing Bouygues fiber transactions of two sub-projects in France.

We believe open access fiber will continue to gain steam and fresh investment will pour into this market in the coming years. Incumbents, cable companies, challenger telcos and non-telco entities like energy companies, municipalities and PE/infrastructure funds all have key roles to play in building sustainable nationwide gigabit fiber in their respective markets. Proactive moves from some Telcos like Vodafone DE or nontelcos like Open Fiber have placed them in a leading position in shaping the gigabit future of their markets. Incumbent telcos have made and are continuing to make big moves, as rumored in Italy and a few other European markets.

If we assume that the deal volume in 2020 will be approximately 60€ billion (similar to the volume in 2019) and assume a similar 40 percent of share of fiber or open access fiber in the total deal volume, we predict funding of 24€ billion going into the fiber sector in Europe. Assuming an average of 1000€ CAPEX required to pass a home with fiber, this implies 24 million new homes can be passed with fiber in 2020 alone. To put this in perspective, the whole of the UK or France can be passed with fiber in just one year. As availability of open access fiber increases, we will see a proliferation of multi-gigabit offers in the market delivered over FTTH, as we have already seen in Singapore and which are also occurring in Italy, Spain and Portugal, among others.

We will continue to watch with interest and report on the developments in this space in the future.