1. Gigabit fiber rollout stronger than ever

In this 5th edition of our report on gigabit fiber, we continue to assess the state of fiber rollout and take-up in the world and observe new innovative services being delivered over fiber (see Figure 1). We are pleased to report that fiber rollout continues to pick up pace in almost all markets across the world, as was also the key message in the previous edition of our study “The race to gigabit fiber” in 2018. As of 2019/2020, there are more than 10 markets where fiber coverage has reached at least 95 percent of homes. We also acknowledge that in some markets, telcos that do not have access to fiber are also actively rolling out 5G fixed wireless access (5G FWA) in order to win back market share in the gigabit broadband market.

In this report, we assess the state of gigabit fiber rollout in selected markets, the success of take-up of fiber, and the impact of fiber on the discontinuation of legacy copper networks. In addition, we observe the increased trend of multigigabit offerings to differentiate in developed fiber markets. 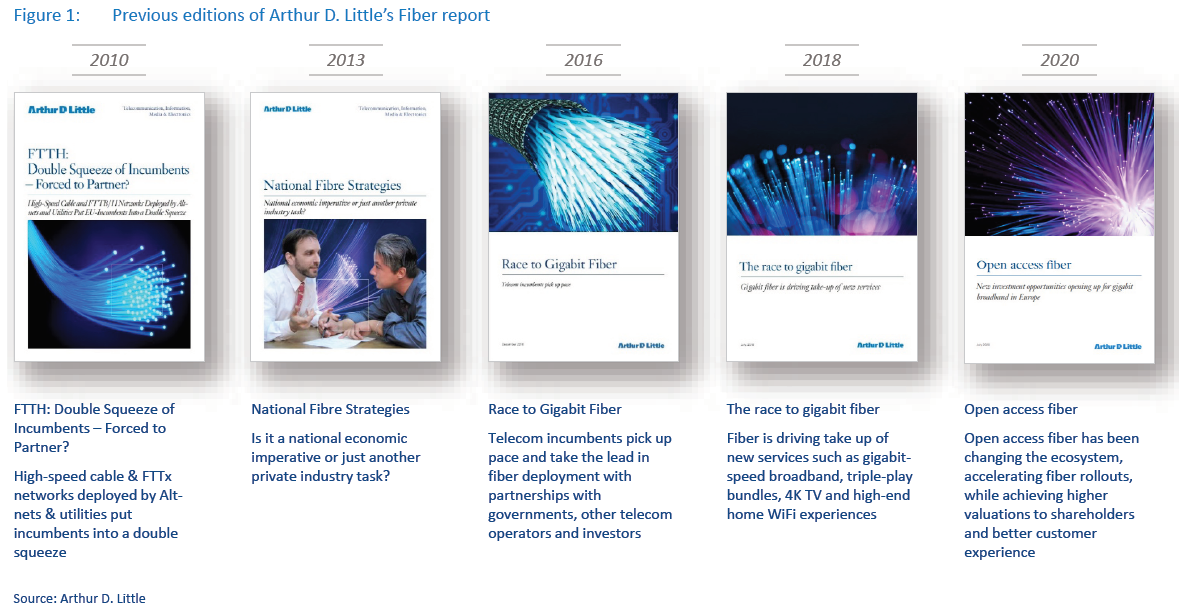 Fiber deployments continue to march ahead in many markets, in line with our prediction in the previous editions of our report. Since 2012, we have observed an increase of 27 percent in fiber coverage among the benchmarked countries, from 39 percent in 2012 to 66 percent in 2020 (see Figure 2). The group of countries where fiber has become almost ubiquitous – covering more than 95 percent of homes – has increased to more than 10 . These markets remain predominantly only in selected geographies: Southeast Asia, Persian Gulf, and the Baltics and Iberian Peninsula in Europe.

In almost all fiber-leading markets, the incumbent has taken a principal role in rolling out nationwide fiber. However, in an increasing number of European countries, alternative operators or new open access fiber entrants have secured billions of euros to deliver promised nationwide fiber coverage in the next four to six years, potentially becoming new future fiber leaders in their respective markets. Such entities include, for example, Open Fiber in Italy, CityFibre in the UK, Swiss Open Fiber in Switzerland and Deutsche Glasfaser and inexio in Germany. In the case of Germany, the two alternative providers, Deutsche Glasfaser and inexio, which target mostly rural and underserved suburban areas, have announced plans to deploy fiber to approximately 8 million additional homes by 2030, moving the coverage from a current 11 percent up to approximately 28 percent. Saudi Arabia is also betting on boosting its FTTH performance by launching a new open access initiative in cooperation with all operators in the market. 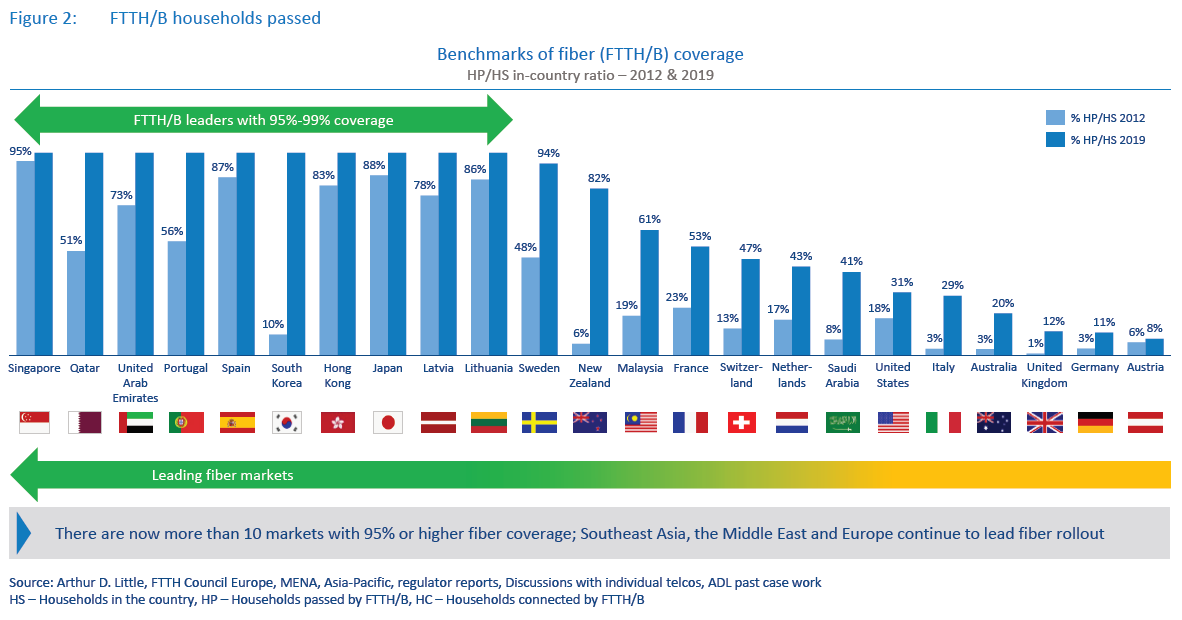 The take-up rates of fiber services have increased in line with the improved coverage, driven by effective migration strategies (see Figure 3). Since 2012, the average take-up rate has grown from 15 percent to 42 percent among the benchmark countries. Migration initiatives in many markets have proven to be effective. Singapore has achieved a fiber take-up rate of more than 95 percent thanks to the discontinuation of cable services by StarHub in September 2019 and active migration of all subscribers to the national fiber network. As a result, fiber remains the only fixed broadband technology available to all Singaporeans. Qatar and the UAE have also implemented effective migration programs, moving more than 85 percent of their customers to fiber. 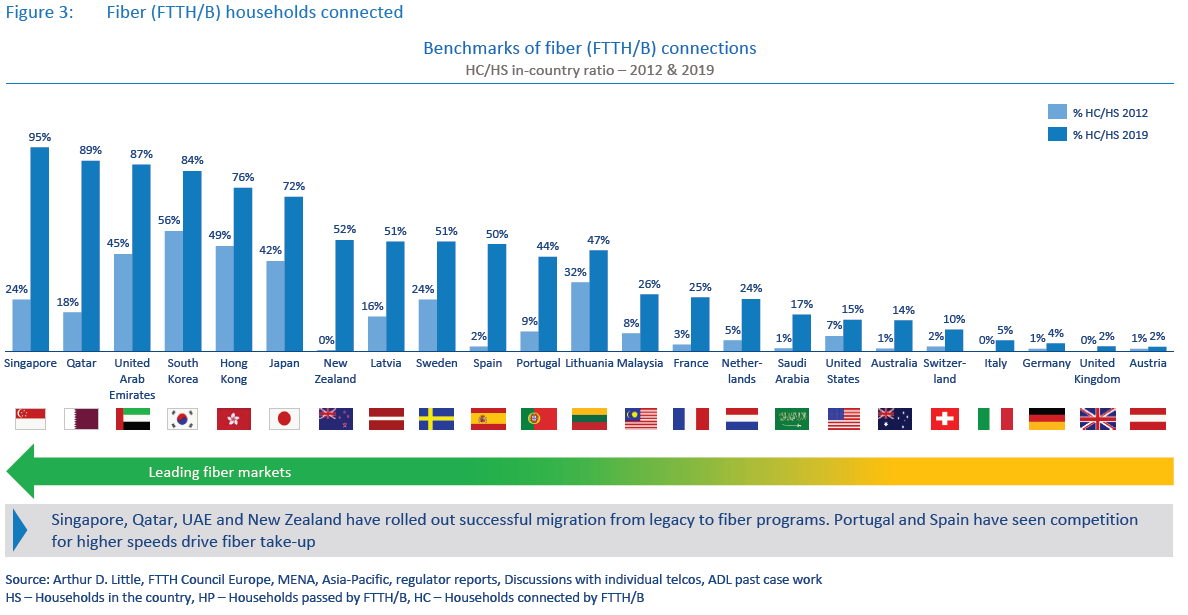 4. Switch off of legacy networks picking up steam

As the fiber coverage and take-up rates continue to grow, incumbents are increasingly announcing plans to switch off and dismantle their legacy copper networks. Singtel in Singapore turned off its copper network in 2018 and migrated its copper and cable subscribers to fiber, allowing the incumbent Singtel and cable company StarHub to switch off their copper and cable networks. Another example is JT Global in Jersey, which already migrated its entire fixed broadband customer base to fiber and will switch off the copper infrastructure in 2020. Operators in at least three other countries plan to completely migrate their customer base to fiber in the next four to five years (see Figure 4).

However, before decommissioning their legacy networks, telcos will need to overcome regulatory and other obstacles, such as providing an alternative to existing regulatory wholesale products and replacing some copper-specific B2B use cases with other technologies. With legacy network switch off, incumbents hope to achieve cost efficiencies especially in network operations. In recent projects, we estimate that fiber networks have up to a 15x lower fault rate and use up to 85 percent less energy compared to legacy copper-based networks. 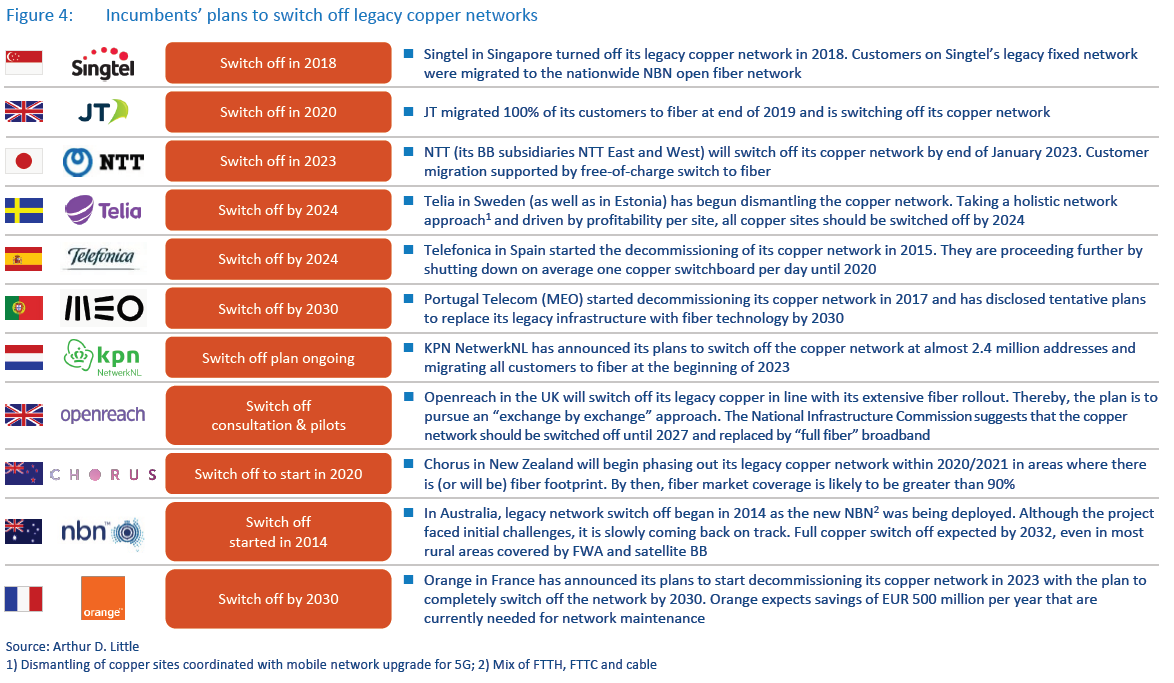 Fiber is undoubtedly an advanced fixed broadband technology that can efficiently deliver multi-gigabit speeds to a large volume of customers in real-life conditions, especially in dense urban areas. Offering 1 Gbps plans has become the norm in the leading Asian fiber markets such as Singapore, Japan, South Korea and Hong Kong, opening the way for multi-gigabit tariffs.

It has been more than five years since the first 10 Gbps plans were initially introduced in the US, Singapore, Hong Kong and Norway (see Figure 5). As of September 2020, we are not aware of any faster commercially available plan for the residential segment. Availability of multi-gigabit plans is still limited to a handful of markets and approximately 10-15 ISPs. However, just in the first half of 2020, there have been at least three ISPs that launched multi-gigabit offers: Zzoomm in the UK, Orange in France and Chorus in New Zealand. 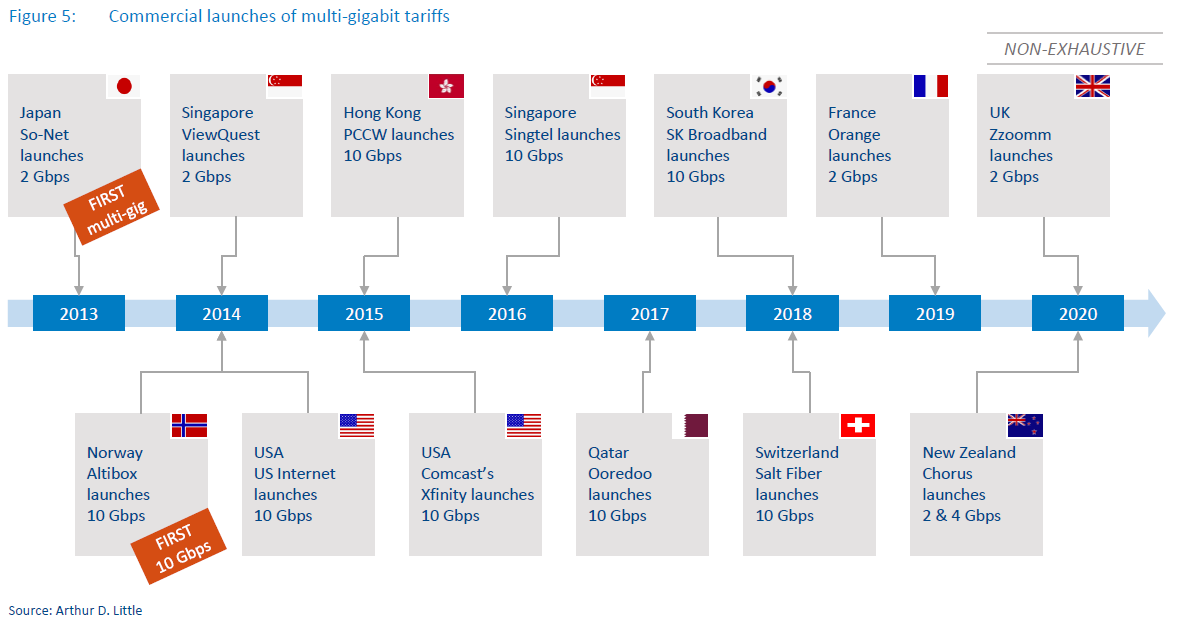 However, in the majority of markets, multi-gigabit tariffs are still considered a luxury that demands a premium. In some cases, the premium is almost prohibitory. Ooredoo in Qatar charges approximately €1,600/month for its 10 Gbps plan (see Figure 6), which results in the majority of its customers subscribing to lower-speed tiers. In the US, Comcast’s Xfinity is the only nationwide ISP with a 2 Gbps plan. At €274/month, it is three times as expensive as the 1 Gbps tariff, which is able to meet broadband needs of even highly demanding customers.

In Switzerland, Salt has been trying to shake up the strong position of the incumbent Swisscom in the local fiber market by launching a 10 Gbps plan in 2018. Delivered over FTTH networks of partnering utilities and bundled with a fixed line and premium TV (Apple TV), Salt’s 10 Gbps plan is offered at €46/month. It took Swisscom over two years to offer a competing product. However, at €83/month (plain broadband), Swisscom’s plan is 80 percent more expensive than Salt’s. Since 2018, Salt has managed to grab more than 5 percent of the fiber subscriber base in the country thanks to this aggressive pricing strategy. The recent partnership with Sunrise to deploy an FTTH network to over 1.5 million homes in the next five to seven years likely ensures that the market share will only continue growing.

We expect that the number of multi-gigabit markets and providers will continue increasing as a means of differentiation in the increasingly competitive broadband markets, driven by new fiber rollouts and DOCSIS 3.1 upgrades allowing cable operators to deliver 1 Gbps speeds (see Figure 6). 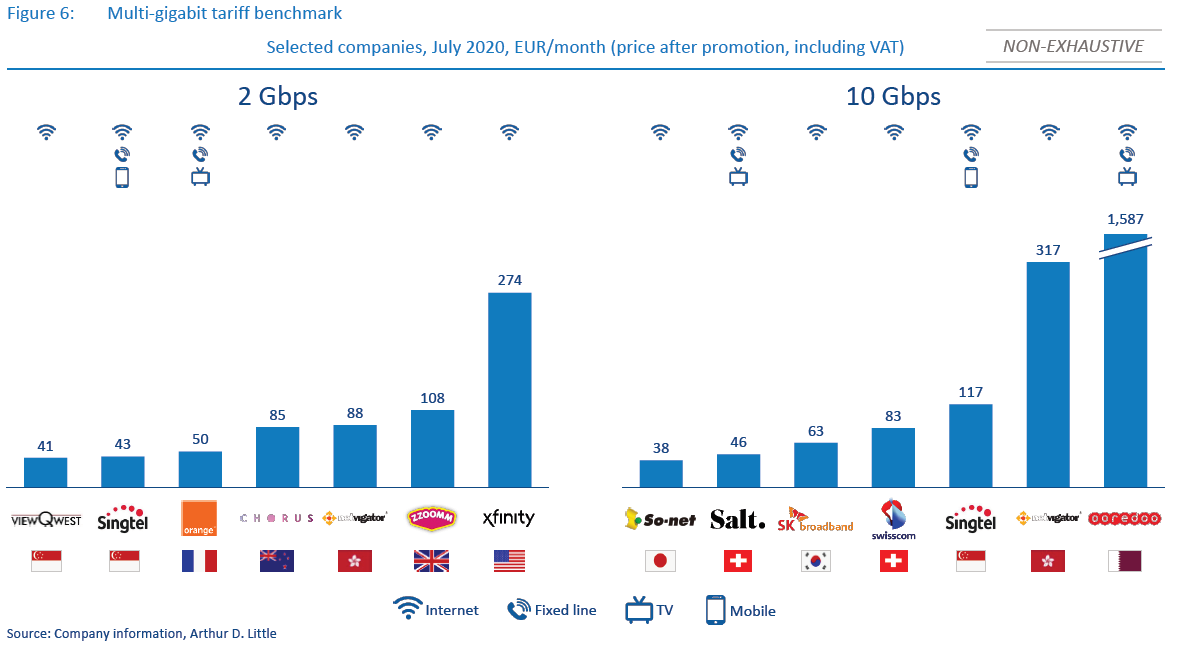 Since the 2018 edition of the “Race to gigabit fiber” report, we continue to be optimistic about the pace of fiber rollout, as well as the pace of fiber take-up in the world. Incumbentled deployments continue to play the leading role in fiber deployment today. However, we believe the importance of open access fiber providers will gain in significance, especially in important markets such as Italy, Germany, UK and Saudi Arabia, among others. Large-scale investment by non-telco entities such as energy companies and infrastructure funds, among others, will continue to expand fiber coverage in these markets. (For further details on open access fiber developments, please refer to our other report on this topic.)

An increasing number of incumbents acknowledge the inevitability of switching off and dismantling their legacy copper networks as fiber coverage becomes ubiquitous, while the cost economics of maintaining a fiber network are far superior to maintaining a legacy fixed network. Initiatives for legacy network switch off have been announced in multiple markets, and we expect to see results in larger markets such as Spain, France or Sweden soon. We also see regulators opening up to the idea that fiber-based solutions can eventually replace regulated legacy network–based products, giving a further impetus to open access fiber rollout in some regions.

Gigabit tariffs have become commonplace in developed fiber markets (mostly in Asia) and are increasingly being offered to customers worldwide. However, multi-gigabit speeds are still available only in a handful of markets. Salt in Switzerland is an example of a provider that uses its aggressively priced multigigabit offer to differentiate and disrupt the fiber market and not only as a marketing tool. We expect that, with new fiber rollouts and increasing competition on the broadband markets, the number of multi-gigabit offerings will continue to grow.

Notes on this report

In this report, we focus on how different countries are investing in next-generation fiber networks using FTTH/B. This report does not seek to be exhaustive; rather, we focus on key markets where fiber rollout is a hot topic. We evaluate the models used for investment and their success stories in terms of both rollout and take-up. We evaluate how fiber, in turn, is driving the rollout and adoption of innovative new services and high-speed broadband offerings. When we use the term “fiber” in this report, we refer to FTTH/B.